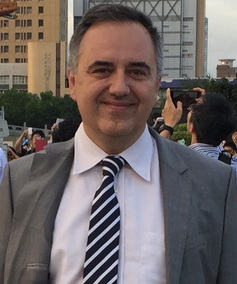 He obtained his Ph.D. in 1991 at the University of Lille 1 in Villeneuve d’Ascq.

From November 2009 to November 2015 he was Head of Research at ENSAIT and Director of GEMTEX research laboratory. Professor Koncar was AUTEX (Association of Universities for Textiles, www.autex.org) President from June 2007 to June 2010.

Professor Koncar has also been Deputy Director of ENSAIT from 2005 to 2007 and Director of International Relations from 2007 to 2009. He still serves as an elected member of the ENSAIT Governing Board.

He has been promoted to Doctor Honoris Causa of the University of Iasi, Romania in January 2010.

His research interests cover the area of flexible textile sensors and actuators, smart textile structures, and modeling and control of complex systems. He teaches in the area of Automation, Computer Networks, Virtual Reality, and Smart textiles.